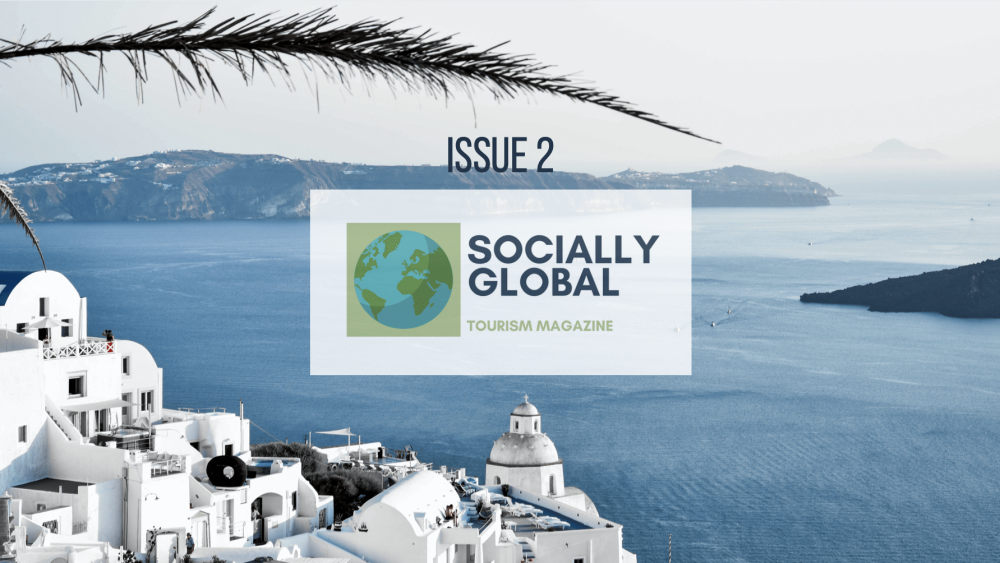 For this week’s article, we spoke to Anna Mastorou a student who grew up on the Greek island Kos. Anna moved to the Netherlands in 2015, but still comes back to her beloved island every summer and for Christmas. She already spoke Dutch from the moment she could talk because Anna her mother is from the Netherlands, so moving to this small country wasn’t an impulsive idea. Now that Anna lives here in the Netherlands for most of the time, she is also studying in the Frisian capital city Leeuwarden at NHL Stenden University of Applied science and following the course Creative Business.  Anna is happy to give you an insight into the life of someone who is from a tourist attractive country!

The tourism industry numbers from Greece keep increasing every year, so much that in 2019 it even counted 34,2 million tourists visiting the country according to statistics. One reason why so many tourists visit this sun-soaked country every year, according to Anna and travel blogger/ current local Dave Briggs, is all because of the rich history, the beautiful coastlines, weather, food, islands and of course the beaches.

The biggest form of tourism in Greece is seasonal tourism and LGBT tourism. LGBT tourism is popular in Greece because it is one of Europe’s most LGBT-friendly destinations by allowing and supporting homosexual relationships and marriage. Famous attractions for national and international tourists are Athene’s and its acropolis, Olympia, Asclepeion, Rhode’s town, the islands Kos, Crete, Santorini, Mykonos, and the beaches.  Santorini is particularly popular for couples because of the romantic ambiance the island has, where Mykonos is the most attractive for the LGBT community by hosting gay parties and having gay clubs/bars. According to Anne “Most tourists go to the islands in the summer because Athene’s town gets too hot”.

According to statistics “since 2009 international visitor numbers to Greece have steadily increased”. To explain the increasing numbers in the tourism industry from 2010 till now it has all to do with the crisis that hit Greece in 2009. When Greece was hit by the crisis everything about that country became cheap for the rest of Europa, Greece became the ideal holiday destination. In the interview, Anna said she noticed the crisis in the number of groceries they did and that the income from her dad was affected because he gets paid by the government.

Greece got into this crisis because of a budget deficit and it became a risk for the rest of Europe so the interest on the loans they had with the EU became so high that Greece got into debt even more.  According to statistics tourism became the lifeline for the Greeks in the crisis, it is now essential to the Greek Economy. But the tourists didn’t come because it was so cheap, they came because they knew they were able to help Greece restore the economy.  According to Anna” I noticed it in the behavior of the tourist, they weren’t here because it was a cheap holiday destination but because they knew they could help this way”. With the amounts of tourists visiting every year Greece is slowly becoming more financially stable.

Greece lays next to Turkey where most fugitives pass through to escape the war in their home country. Lesbos, a Greece island that is next to Turkey, is the island where all of the fugitives escape too because they see more chances and opportunities in Europe. This came to a point where there were so many fugitives that the streets were overcrowded with and they started to live in abended hotels Anna remembers. The problem with all the fugitives coming to Greece according to Anna is, that Greece doesn’t even have the organization and resources to help themselves so how are they supposed to help all these people.

For Greece, tourism is their lifeline to keep the economics working and stable, the whole country is made for the number of tourists. Most people living in Greece work in tourism sectors like restaurants, hotels, and tourist attractions. Anna her mother works also in a hotel in Greece and, like most people, only seasonal from April till October when most tourists are in the country. This is a positive effect because if tourism wasn’t this big and popular a lot of Greek locals will lose their jobs.

There is also a negative part of tourism, when asking Anna she said that the younger tourist who came to the country literally destroyed some places. The younger tourist who will come to Greece is only there to have a good time, party, drink and enjoy themselves. This led to beaches being covered with trash and drunk people walking through the streets where the “normal” tourist was celebrating their vacation.

“They didn’t come for the island anymore it was like a disruption of the peace” also the influencer who will visit Greece can cause some trouble, they think they are more privileged than other tourists and this can lead to problems and irritations. Anna remembers that once when she was at a restaurant, a group of influencers came and asked for a lot of free food, and in return, they would publish some pictures on social media. Anna thinks that influencers don’t show the beauty Greece has to offer and that they don’t care, they will only come to take pictures of themselves to gain followers and likes.

Anna previously said that not every European citizen comes to Greece to see what Greece can offer them, but that they are here to enjoy the sun and have a fun time. When asked what makes Greece unique and what it can offer other citizens, she started with the history of Greece.

The history of Greece is for most people famous for its architecture, theatre, and sculptures. The architecture is known for its columns they used while building their temples for their gods. The theatre is known for its tragedy plays at religious festivals. The Greek sculpture is also known as Ancient Greek sculpture. According to Ancient history encyclopedia, the Greek sculptors were concerned with proportion, poise, and the idealized perfection of the human body.  For tourists, Greek is also known for their Greek food like Taramasalata which is dip like tzatziki, and Moussaka a layered dish with aubergine.

Most tourists will also say that the white houses and small streets are typical for Greece, when asking Anna she said that only small touristic parts of Greece will have houses like this. The rest of the houses are also painted in light colors to help with the heat and don’t look like the typical brick houses you will see in the rest of Europe.

When you go to Greece choose a small hotel or locally-owned house to support the small businesses in Greece. All the families and couples that go to the all-inclusive 5-star hotels will probably only stay at the resort with a pool and unlimited food. They won’t go out to explore Greece, eat out, shop, and go to businesses that are owned by locals so all the money they spend will stay within the hotel. When people book a locally owned house or go to a small hotel they will spend their money outside the hotel and support other Greek businesses, then the economics of Greece will be supported.

What Anna would suggest to students when they come to Greece is to rent local, shop local and see everything Greece has to offer, also the not that famous tourist attractions because Greece has so much more to offer!